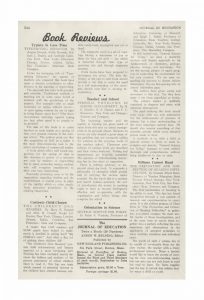 Back in the 1930s, typewriting was a big deal. There were even typewriting magazines, much like we had computer magazines when home computers were novel. I ran across this review of Dvorak, et al.’s book Typewriting Behavior, the research team’s report to the Carnegie Foundation for the Advancement of Teaching, which funded the research that led to the improved “Simplified Keyboard” that we now call the Dvorak Keyboard.

I obtained all of the remaining new (printed in 1936) copies of the 546-page book from Dr. Dvorak’s family, and they are available here.

Under the intriguing title of “Typewriting Behavior,” the quartet of teachers who prepared this book have made a distinct contribution to effectiveness in the learning of typewriting.

The approach has been both practical and scientific. Traditional methods of teaching are in some cases found at variance with the psychology of the student. For example — why so much insistence on typing without errors — or upon typing without the use of sight to bring fingers upon keys? Why those monotonous warnings against typing too fast, when speed is so greatly to be desired?

The aim of this book is to assist teachers to train typists at a saving of time over present customs in the average school. The authors point out that the acquisition of skill as a typist is the most time-consuming task in the entire curriculum of commercial studies.

A book which offers well tested suggestions for the saving of time in this direction is certain of a welcome not only by teachers of typewriting but by many somewhat mature students who still recognize impediments to their own best functioning.

Especially promising seem to be the suggestions regarding rhythm and the establishment of mental poise, in place of the rigidity which so often results from prevalent procedures in the clicking classrooms.

Author Randy Cassingham is best known as the creator of This is True, the oldest entertainment feature on the Internet: it has been running weekly by email subscription since early 1994. True is social commentary using weird news as its vehicle so it’s fun to read. Click here for a subscribe form — basic subscriptions are free.